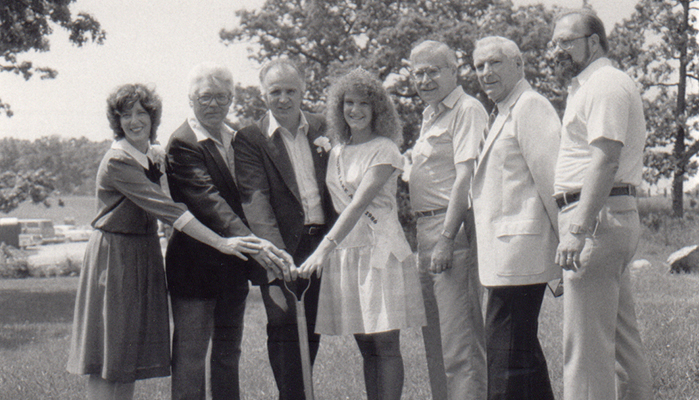 The five elected commissioners' philosophy was to provide total and comprehensive recreation for the community and job opportunities for local residents. With that basic philosophy, the commissioners and staff through the years have worked to bring excellence and growth to our Park District.

To implement that philosophy, the District presented four programs by the end of December, 1974. With the assistance of the Junior Leaders, the District's first programs included a senior citizen excursion, a mini-circus and a Christmas Eve crafts show.

On July 1, 1975, the District moved into its office at 246 Cedar Lake Road (the former Jones Store). This building provided a reception area, administrative office space and recreation areas.

The Park District held its Grand Opening on August 16, 1975, to show the community the new center and introduce the preliminary plans for a new park. The park would soon be named Shag Bark Nature Preserve.

Before long the facilities were inadequate to accommodate the programming. On November 1, the District acquired the adjoining storefront (former Little Jones), broke through the wall and was able to begin programming at both 246 and 240 Cedar Lake Road.

The 1980's progressed rapidly with AYSO Soccer, the Avon Baseball Complex, purchasing of Renwood Country Club, the Special Recreation Association, our present Community Center on Hart Road in Round Lake and the Fitness Plus Fitness Center.

The Round Lake Area Park District is a joint owner of the Avon Baseball Complex, which insures that those baseball fields will remain in the community. The Baseball Association supervises and maintains the program. The organizations have been providing the children of the Round Lake Area the opportunity to participate in a structured baseball and softball program for many years. The organization is volunteer based and provides many Park District residents with the opportunity to learn the basic fundamentals of the game.

The Aquatic Facility features a pool and Splash Pad for summer use. The pool includes zero depth entry, a diving board and gets as deep as 12.5 feet for more experienced swimmers. The Splash Pad has a complete water play system complete with a 14' Blue Heron named Hector who is ready to drop his water bucket on you! Grassy areas for sunbathing make this facility more than just a place to swim, and "Splashers" concession stand makes cooking in the summer unnecessary!

The completion and opening in 1999 of the Warming House/Concession Building at Hart's Hill provides warmth and nourishment for sledders during the cold winter months. The area includes a large hill and a smaller one for younger children who aren't quite as daring. This hill is lighted for nighttime use.

In October 2003 the Park District adopted it's Master Plan which covers many initiatives for the district. Some of it's short term goals, (1-3 years) include facility improvements, land acquisition, the completion of The Teen Center renovation and the construction of a 50,000 square foot Sports Center.

In June, 2004, the Park District opened its Teen Center located at 2071 Orchard Road. The first program held there was the district's Teen Camp. Nearly 100 teens attended the camp every day.

In June 2005, the Park District opened its 50,000 square foot Sports Center. The main amenities included classrooms, multipurpose rooms, an indoor gymnasium and an indoor soccer field. In July, a climbing wall was added. On July 31, 2005, the Board of Commissioners renamed the district's Community Center to the Robert W. Rolek Community Center. Mr. Rolek, who served as the Executive Director of the district from 1980 to 1995, was instrumental in building the district into one of the leading park district agencies in the state.

In May 2006, the district completed a 5,500 square foot addition to its Community Center. The addition consists of 2 classrooms for the Child Development Center and a large 2,700 square foot multipurpose room.

Later that summer, the park district constructed a Ropes Course at Hart Woods which includes both low and high elements. The course was designed for group team-building exercises as well as for a bit of "adventure."

In 2007, the district completed the tedious duty of acquiring and consolidating over 103 vacant residential lots on Fairfield Road in Round Lake Beach. The acquisition was for the future development of an outdoor sports park, duly named Fairfield Sports Park. Upon receipt of a $400,000.00 grant from the Illinois Dept. of Natural Resources, the park district began to develop the park in the Fall 2008. The remaining portion of the park will be completed in phases as funding permits.

Another significant achievement in 2008 was the completion of a KaBoom! project in which, in one day, over 500 volunteers constructed a skate park and a playground at the Rolek Center.

One month later, the district adapted its next Master Plan which will guide the district for up to the next 10 years in property acquisitions, development, program initiatives and maintenance of existing facilities, parks and assets. The Master Plan was able to incorporate a significant number of initiatives and recommendations received through a community needs assessment also completed in 2008. "The district thanks everyone for their valuable insight and feedback."

In 2009, the district was able to partner with Comcast for a Comcast Cares Community Day in which over 500 Comcast and area volunteers performed an amazing amount of work in beautifying district facilities and open space.

Then later in 2009, the district received yet another IDNR grant to purchase 6 acres adjacent to the Sports Center which will eventually be developed into more outdoor sports fields.

In the fall of 2009 the district was the first ever state agency to receive the Joint Distinguished Agency Accreditation from the Illinois Parks and Recreation Association. The accreditation required a successful evaluation of the district operations, programs and services.

Looking Towards the Future

The Round Lake Area Park District will continue to reach out to the community and provide a dynamic and caring recreational environment. The benefits will continue to be endless for you and your family. Parks and recreation help facilitate strong, vital and involved communities, create connection among family members, and help to promote ethnic and cultural understanding and harmony. We also serve as a source of community pride, provide a support base for youth and lifelines for the elderly, reduce alienation and delinquency, create outlets for conflict resolution, and provide opportunities for social bonding. Recreation brings meaning, purpose, and pleasure to people's lives. The Round Lake Area Park District will continue to contribute to both the years in one's life as well as the life in those years.

Subscribe to the Round Lake Area Park District E-newsletter!

Subscribe to a Round Lake Area Park District E-newsletter! Newsletters will be delivered to your inbox every other month. There is no obligation to subscribe and all users can unsubscribe at any time by clicking the unsubscribe link of any received e-mail. Sign-up today!